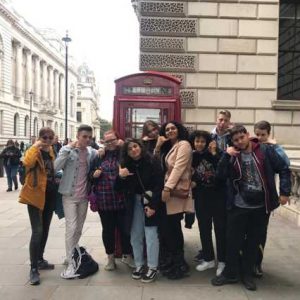 After a 10 hour bus ride, and without having had much sleep, we went onto the ferry in order to arrive at our destination. The ferry itself was huge and really loud and there was even a cafeteria and a Starbucks. Knowing that the sun was about to rise, we went outside to the top deck to appreciate the beautiful scenery, which was really breathtaking to look at. Having arrived in Great Britain we went into our bus again and after a total of almost 14 hours we finally arrived in London.

Soon after, we had to do our interviews near Trafalgar Square. For our interview project we worked together with a partner. In advance, we had thought of questions we wanted to ask the British, for example „What are the positive and negative aspects of being British or of living in London?“ or „What do you think about the Brexit?“. Prepared with our questions we encountered people in the streets and asked them, first of all, for their permission to interview and even film them, so our English class could see and discuss the results. At first, we all were really nervous about talking to strangers and even interviewing them, but the people were all really nice and gave their best to answer our questions as good as they could. However, it was really hard to find some real Londoners because there were so many tourists. In my opinion, the interviews were really fun to make and because of the people we have encountered, we actually wanted to interview more people. At first, of course, it was really intimidating being in another country, in such a big city, talking to strangers and asking them questions concerning controversial topics. The British courteous manner, however, made it easy for us to start a conversation and to successfully accomplish our interview project.

LONDON AND ITS SIGHTS by Max Uhlitzsch

Day 2 was one of our best days in London because we got the opportunity to visit most of the sights in London. In the upcoming text I am going to point out some facts about the sights that have been most striking and interesting to me.

The first sight I am going to talk about is Big Ben. Big Ben has helped London to keep being on time for 157 years already. The clock tower itself is called “The Elizabeth Tower” – named after England’s Queen Elizabeth II. Standing at over 96 meters tall, the tower is 72 meters taller than Buckingham Palace! Did you know that Big Ben is in focus of New Year celebrations in the United Kingdom because radio and TV stations tune in to its chimes to welcome the new year?

Another really important sight that has been existing since the year 2000 and has been visited by over 80 million visitors is the London Eye. At a height of 135 meters, the London Eye is the tallest Ferris wheel in Europe and the fourth tallest in the world. It has a total of 32 Ferris wheel cabins. Did you know that it is 200 times larger than an average bike wheel and when erected in 1999, it was the tallest Ferris wheel in the world?

I personally really liked London a lot, although it is really crowded and there is often too much going on at once. Generally speaking, I would say that especially sightseeing is a must-do in London to understand more about the city and its history. My first impression was that their underground works extremely well and that it is very difficult to understand its map at first.

Another impression that comes to my mind, when thinking about London, is the fact that the people seem to be very courteous and genuine, which makes me personally think very positive of them.

In conclusion, I would definitely recommend visiting London because it is a very interesting city and it has its own special character. Especially with regard to the historical background of the city, London has a lot to offer.

On Sunday morning we visited the Tate Gallery of Modern Art. The museum is so huge that it is almost impossible to see everything in just a few hours. However, the visit was definitely worth it, especially as it is for free. In addition, we could see the whole center of London from the viewing platform!

Unlike the others, I went on a guided tour in the Globe Theatre with my teacher around noon, as I was the only one who wanted to join her. Because of this, we could see the Globe Theatre from every angle, and found out that William Shakespeare and his group of actors used to perform in a theatre on the other side of the river. Because they had a fight with the landlord, they decided that only the land was his property and not the theatre itself. So around Christmas 1599 they stole the theatre and transported it with ships over the river. In its time, the Globe Theatre was the most popular theatre in London and all of Shakespeare´s plays were performed there. Unfortunately, it caught fire during a performance of Henry VIII and was rebuilt one year later. However, it was closed in 1642 by the Puritans and later dismantled. Just because of Sam Wanamaker, a copy of it was built and opened in 1997.

At 2 pm, we met with the other students to watch Shakespeare’s A Midsummer Night’s Dream live on stage in the Globe. We had the cheapest places, standing right in front of the stage, just like the penny-stinkers in Shakespeare’s times used to do. Do you know why the cheapest places in the theatre were for the “penny-stinkers”, as they were called back then? Well, a ticket cost only one penny, so they were affordable for all people. Since things such as theatre tickets did not exist back then, one could not leave the Globe during a play to go to the toilet, as returning would have been difficult. That’s why people decided to do their “stinky affairs” right where they stood.

The play was just great! Even though the actors recited the original lines, one could understand everything they said because of their terrific performance. The colorful costumes and props were great, too. It was the perfect combination of old and modern. One role was even played by one of the spectators, which was extremely funny. They involved modern music and dances, and the actors sometimes jumped off the stage right into the audience. Although we had to stand for two hours, none of us complained! Every single one of us was shocked by how great the play really was! So if you ever go to London, you have to see a play in the globe! The cheapest tickets cost just 5 pounds. Personally speaking, it was the greatest play I have ever seen!!!

HEADING BACK HOME by Kathrin Wycisk

On our fourth day it was the last opportunity to see some of the famous sights. First, some students of our group left the bus to visit the Docklands. Centered in the Eastern part of London is one of the biggest harbors in the world. After that, we were crossing Tower Bridge and arrived at the London Eye.

While the other tourists decided to take a walk through the city, most of our students wanted to buy souvenirs for their families, friends or just for themselves. J

Sadly, after about two hours we had to return to the bus because we were heading back home to Germany. Instead of using the ferry, like on our outward journey, we were driving through the Eurotunnel – a tunnel between France and England, which is 50 km long. A huge tip from all of us: Don’t use the bus if you want to arrive as a human being 😉 Driving through the Eurotunnel is way faster.

The trip to London was hilarious. I think it was a great experience and also enhanced our class cohesion. We are very thankful for the opportunity to discover London, and to encounter the British people and their culture. Our journey will stay in our minds as a great memory. 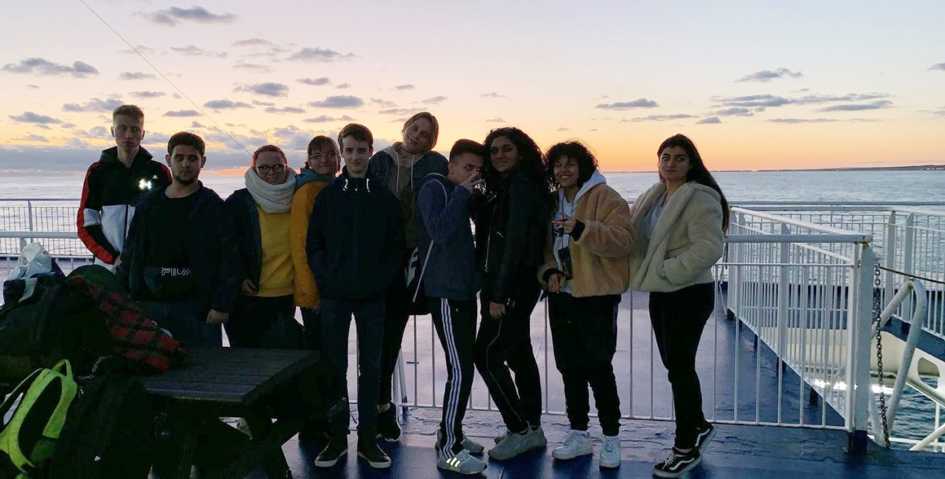